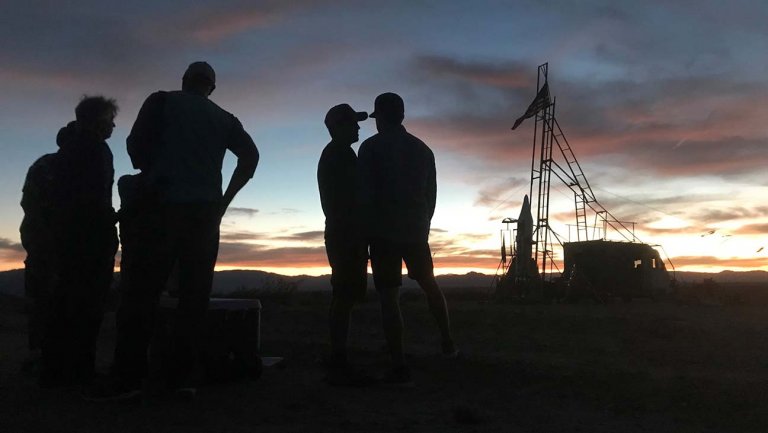 Sad news over the weekend when a daredevil strapped to a low-budget rocket crashed into the Earth and died.

‘Made Mike’ Hughes was being filmed by the Science Channel for an upcoming series called Homemade Astronauts.

The premise of the show — following self-funded rocketeers with shoestring budgets — is certainly interesting for spaceflight fans, but Hughes tragic death highlights a fatal flaw in the show’s recipe: safety is not low budget.

In retrospect, nothing about the stunt’s description sounds responsible:

In a cosmic quest to explore the final frontier on a shoe-string budget, Mike Hughes and Waldo Stakes have built a steam powered rocket that will launch “Mad Mike” 5,000 feet into the air. As ground-breaking and awe-inspiring as this event will be, it is only the first step towards an even more ambitious goal in space exploration.

The imaginative duo are aspiring to launch Mike 62 miles into the air, clearing the Karman Line — the border between Earth’s atmosphere and outer space. This subsequent phase will incorporate a “Rock-oon” (part rocket, part balloon) that is still being developed. But, before this ambitious event can transpire, they are seeking to raise awareness through this initial launch.

Justin Chapman, a freelance journalist quoted by the LA Times, was also filming the stunt attempt from afar and posted video of the tragic accident on Twitter.

“Everyone was stunned. They didn’t know what to do,” said Chapman, who had been working on a profile of Hughes. “He landed about a half a mile away from the launch pad.” […]

Chapman said he believes the daredevil had been knocked unconscious during the launch, which took place in the desert south of Barstow, off Highway 247. “The parachute ripped off at launch,” he said. “So the rocket went straight up in an arc and came straight down.”

None of Hughes’ backup parachutes activated, either, Chapman said.

I can’t help but wonder if the Discovery-owned Science Channel holds any moral obligation to ensuring the safety of participants on its show. The shoestring budget rocketeer appearance is lost when a big budget network is involved.

Either way, this ill-conceived concept of a series will be remembered for encouraging stupid stunts, not encouraging spaceflight and exploration.

Homemade Astronauts is conflating provocative stunt work with science and spaceflight, but so far it’s only produced a snuff film.