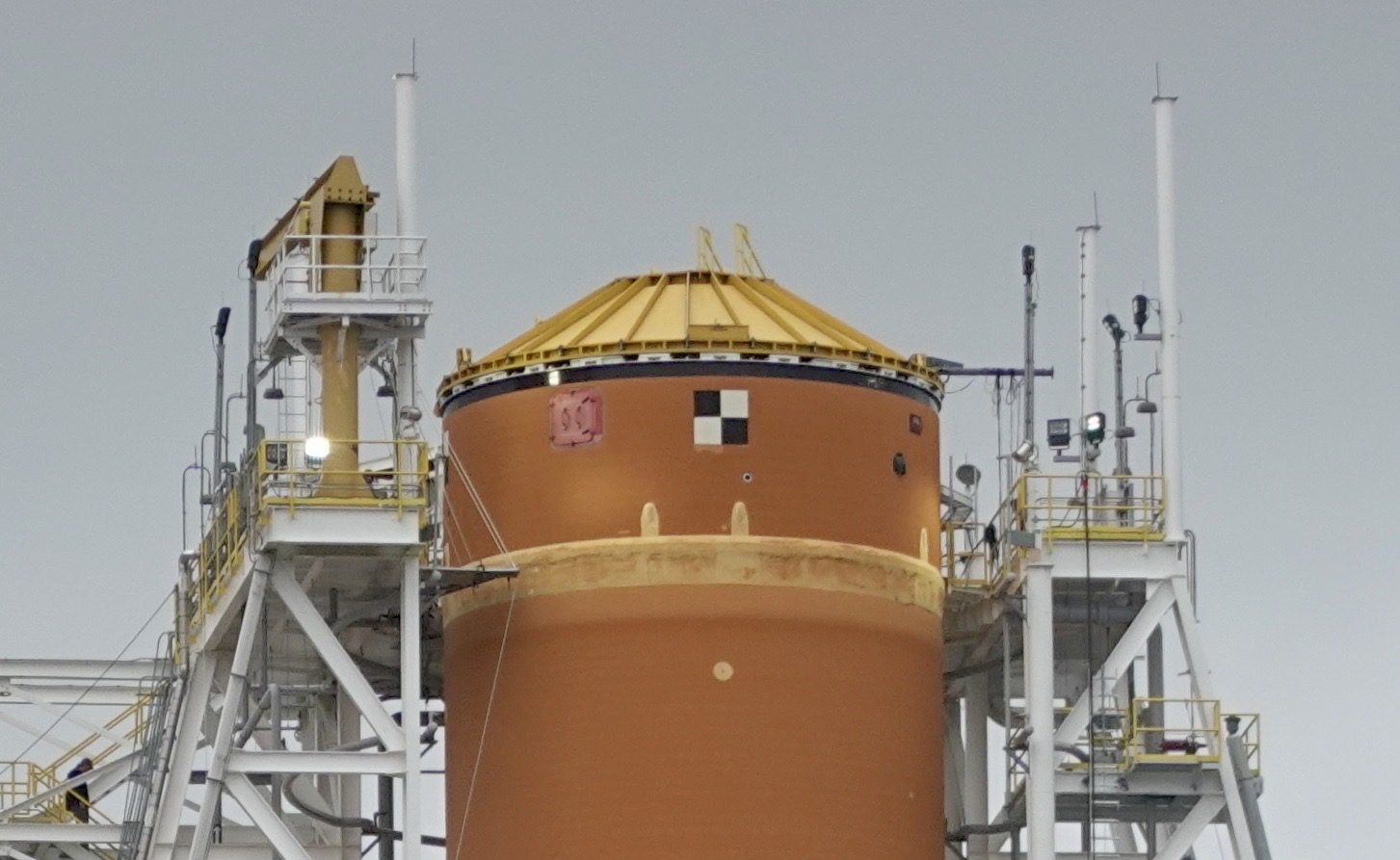 This giant orange thing is the core stage of NASA’s Space Launch System, a super heavy-lift launch vehicle currently being built and tested, before it takes flight on the Artemis I mission.

A future version of this hardware will be used to take the first woman and next man to the Moon during this decade as part of a long-term strategy to eventually reach Mars.

Before that, NASA will conduct an uncrewed test flight of Space Launch System to send the Orion spacecraft around the Moon. This giant orange rocket is the exact hardware that will be used for Artemis I, formerly called Exploration Mission-1, as early as later this year:

Artemis I will be the first integrated flight test of NASA’s deep space exploration system: the Orion spacecraft, Space Launch System (SLS) rocket and the ground systems at Kennedy Space Center in Cape Canaveral, Florida. The first in a series of increasingly complex missions, Artemis I will be an uncrewed flight that will provide a foundation for human deep space exploration, and demonstrate our commitment and capability to extend human existence to the Moon and beyond. During this flight, the uncrewed Orion spacecraft will launch on the most powerful rocket in the world and travel thousands of miles beyond the Moon, farther than any spacecraft built for humans has ever flown, over the course of about a three-week mission.

The empty rocket towers with 212 feet of 2219 aluminium alloy and a 27.6 foot diameter covered in orange spray-on foam for insulating cryogenic propellants.

My connection to Space Launch System is multifaceted.

For starters, we’re all living through history, and if you’re reading this, you’re curious and paying attention like me.

I was 20 when the Space Shuttle Program ended, and Apollo-era NASA before I was born feels like ancient history. My experience with American spaceflight consists of satellite deployments and resupply missions to the International Space Station, not human spaceflight beyond Low Earth orbit.

Space Launch System and Artemis missions will become the NASA history that my generation lives through.

The core stage of Space Launch System is also a local story for me as a resident of South Mississippi.

The core stage, largest ever built by length and volume, is being manufactured at NASA’s Michoud Assembly Facility in New Orleans using state-of-the-art manufacturing equipment. […]

Boeing is the prime contractor for the SLS core stage, including its avionics. Structurally identical versions of four of the five major core stage sections (engine section, intertank, liquid hydrogen and liquid oxygen tanks) are being tested under simulated flight-like stresses at NASA’s Marshall Space Flight Center in Huntsville, Alabama.

The core stage contains the vehicle’s avionics, including flight computers, cameras, batteries, power and data handling, sensors and other electronics. Flight computer software testing and qualification is underway at Marshall. Hardware and software integration is ongoing to ensure implementation of safe, highly reliable avionics and software on SLS.

The B-2 test stand at NASA’s Stennis Space Center near Bay St. Louis, Mississippi — originally built to test Saturn rocket stages that propelled humans to the Moon – has been renovated to test the massive SLS core stage.

That renovated B-2 test stand holding the core stage of SLS at NASA’s Stennis Space Center is what you see in the photos below.

Through NASA Social, I attended the State of NASA 2020 address by NASA Administrator Jim Bridenstine on February 10. Part of that experience included time in front of the B-2 test stand and the core stage.

Stennis Space Center is located less than an hour from my home, but access is limited to NASA employees and contractors. I’ve been on the property twice before this trip, but only to participate in half marathon runs before core stage arrived.

Naturally, I really wanted to see the core stage of Space Launch System while it was vertical on the test stand just an hour from my house. The opportunity to capture these photos of my own was a dream.

Later this summer, Stennis Space Center will conduct the conclusion of the Green Run test of the core stage, firing it off for a full eight minutes, before the core stage is transported to Kennedy Space Center for full assembly. Launch is currently targeted for later in 2020 at the earliest.

The Green Run testing will be the first top-to-bottom integrated testing of the stage’s systems prior to its maiden flight. The testing will be conducted on the B-2 Test Stand at Stennis, located near Bay St. Louis, Mississippi, and the nation’s largest rocket propulsion test site. Green Run testing will take place over several months and culminates with an eight-minute, full-duration hot fire of the stage’s four RS-25 engines to generate 2 million pounds of thrust, as during an actual launch.

I really hope to be present for both the green run and the actual launch. Both opportunities would be incredible events to witness.

Even with this giant orange rocket being located a short drive from my house, it still feels like a local secret to even know that the core stage is actually located there — or that Space Launch System and Artemis are happening at all.

I suspect this will dramatically change as Space Launch System moves closer to taking flight.