Pegasus: NASA’s workhorse of the sea is getting back to business 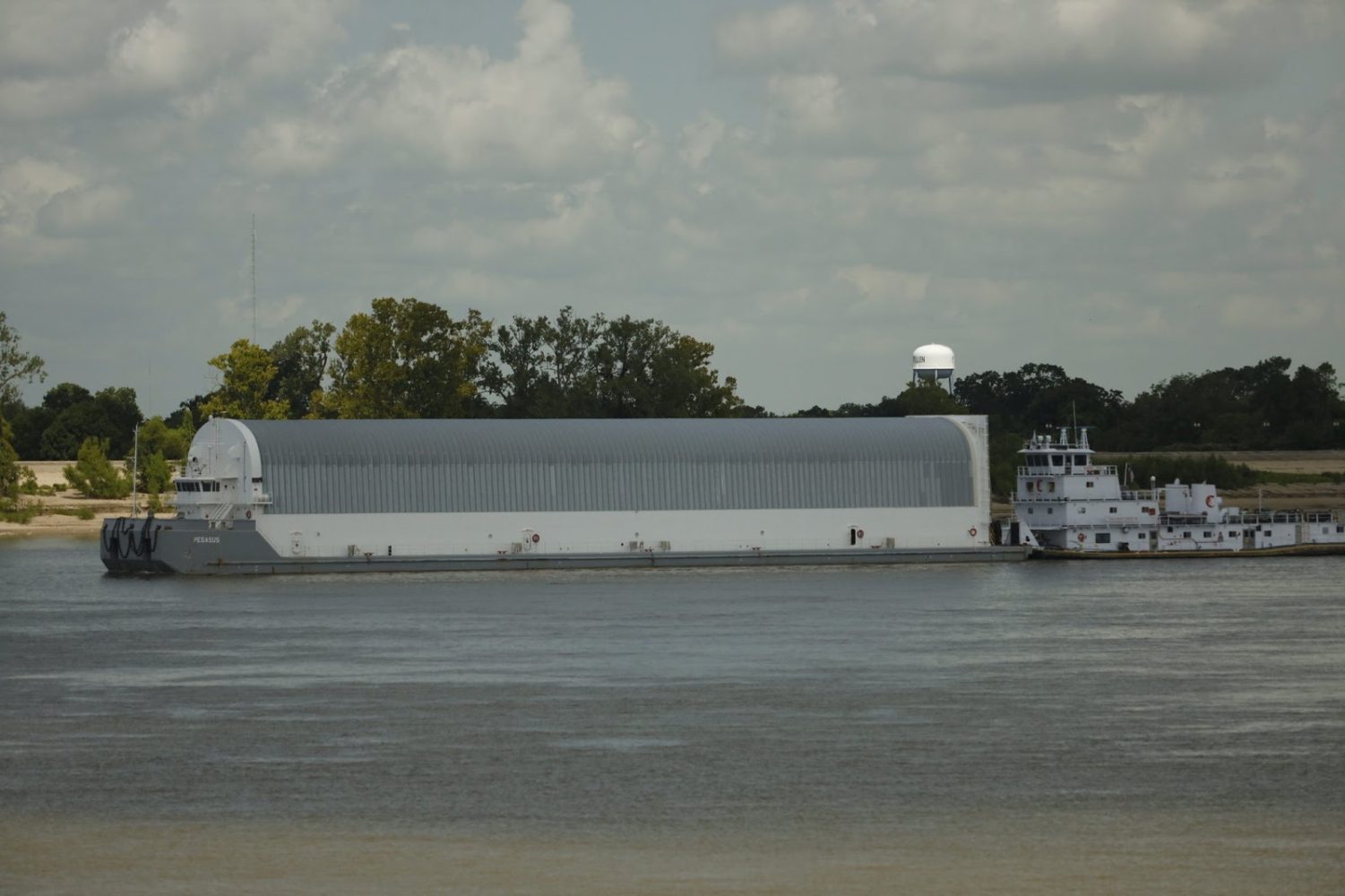 NASA’s Pegasus barge is currently in the final stretch of its trip from Huntsville, Alabama, to the Kennedy Space Center in Florida. On this particular trip, it’s carrying the Launch Vehicle Stage Adapter (LVSA) to be used on the maiden flight of the SLS launch vehicle. In a time when more attention than normal is given to waterborne vessels related to spaceflight, Pegasus shows that NASA has been doing it for a long time.

Pegasus was constructed in 1999 in Pearlington, MS as a continuation of a lineage of barges used to move some of the largest pieces of NASA’s launch vehicles dating back to the Apollo era. Back then, however, the fleet was bigger. The Apollo program saw a rush of construction of the Saturn I and V launch vehicles. Initially, NASA utilized open-deck barges like Little Lake, Pearl River, and Compromise. Later, a transition was made to covered barges like Poseidon, Orion, and Paelemon.

Regardless of design, all were used to move pieces between different centers through construction, testing and eventual stacking. Destinations included the Marshall Space Flight Center in Huntsville, Alabama, the Michoud Assembly Facility in New Orleans, Louisiana, The Mississippi Test Facility (now the John C. Stennis Space Center) and Kennedy Space Center in Florida.

Changes came with the end of the life of the Saturn family and the beginning of the Space Shuttle program. Open-decks were no longer being used for larger, high-value pieces.

The design and testing process of the Space Shuttle components meant that different parts could be moved in different ways. The orbiters themselves could be flown wherever they needed to go on the back of a modified Boeing 747.

The SRBs (Solid Rocket Boosters) were constructed and tested in Utah before being broken down into segments and transported by rail. The only piece that still required transport by waterway was the External Tank, built in New Orleans. NASA kept two of its covered barges, Poseidon and Orion, to carry out this task. The destinations for these barges would also be reduced.

Now, they would only travel between the Michoud facility and KSC. A few trips were made to Vandenberg AFB in California in preparation for shuttle missions to be launched from there, but the loss of Challenger in 1986 changed those plans and KSC became the only Shuttle launch site.

As the shuttle program progressed, it became evident that it was launching less frequently than designed and the need for two barges to transport ETs was not needed. NASA decided to eventually retire both covered barges it still had in favor of a brand new barge: Pegasus. Between 1999 and 2011, it would make the New Orleans to KSC trip 41 times, delivering 31 ETs for the Space Shuttle (some were returned occasionally for fixes).

The end of the shuttle program brought uncertainty for almost the entire agency, including Pegasus. She would be called upon briefly to move hardware for the short-lived Ares program. But the upcoming SLS program would bring big changes. Literally. Pegasus was sent to Conrad Shipyards in Morgan City, LA for upgrades that were completed in 2017.

Notably, it would see its length increased from 260 ft to 310 ft to accommodate the core stage of the SLS launch vehicle, in addition to other upgrades. And since then, it has already made noteworthy trips for the program, such as the delivery of the core stage pathfinder to KSC (and its return to Michoud where it can be seen today from the street) and the delivery of the first core stage to Stennis in MS for its Green Run Test. This puts the Mississippi facility back on the list of regular destinations.

As she completes her latest journey, Pegasus’ role is once again becoming prominent in America’s mission to return to the Moon. Though she moves slower and is infinitely quieter than the rockets she carries, her role in their flights is no less important than the space-bound vehicles she ferries. Pegasus has sealed her place in history, proudly carrying forward the heritage of the ships that came before.