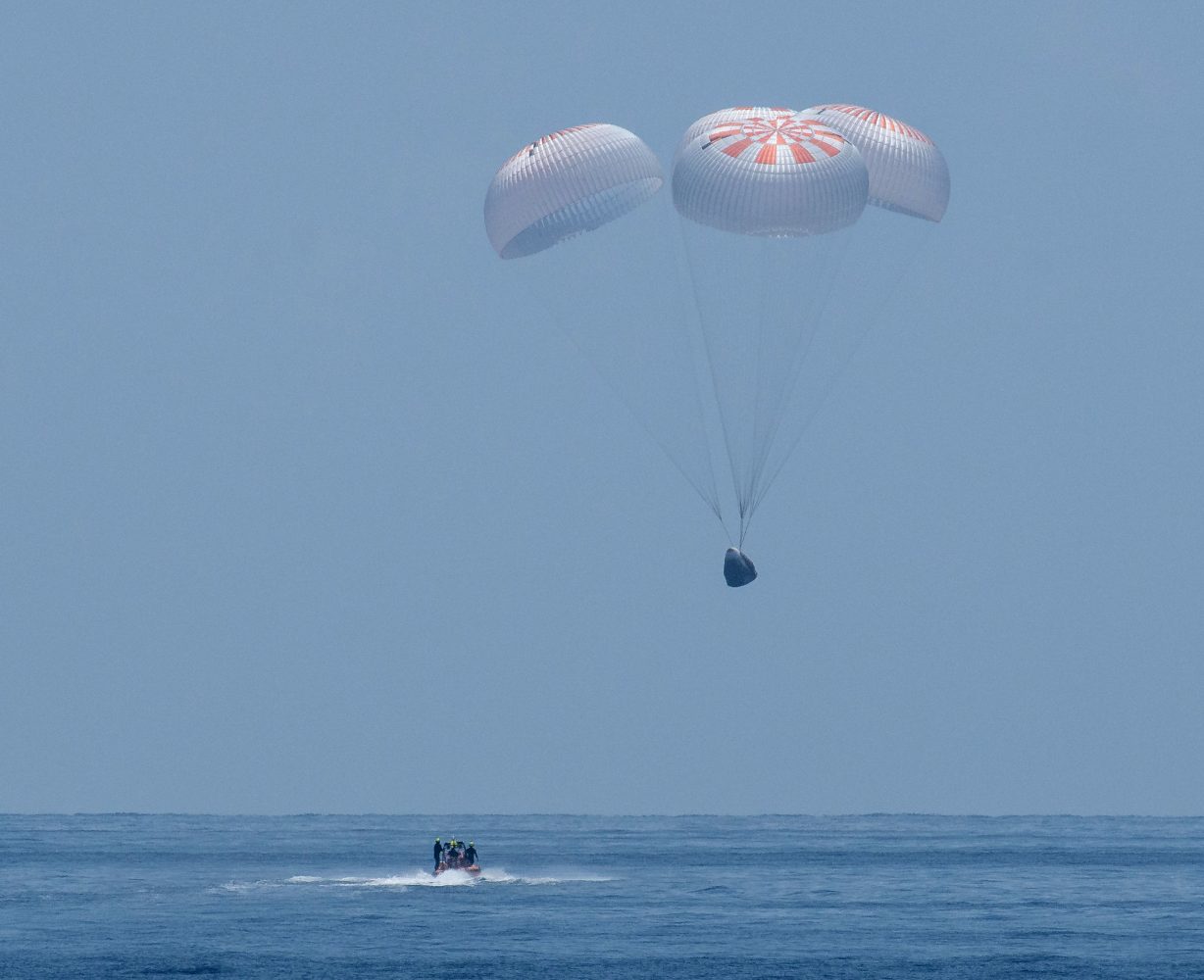 SpaceX’s Dragon capsule Endeavour successfully splashed down today off the coast of Pensacola, FL after a 64-day mission to the International Space Station. The return process began last night with the undocking at 7:35 pm EDT and subsequent departure burns. The crew — Astronauts Bob Behnken and Doug Hurley — was then free to get a full night’s rest.

Today’s events started with a wake-up message from the crew’s kids, at one point saying “Wake up! You can sleep in tomorrow!” Other events leading up to reentry saw more engine burns, the suits being donned one last time, closure of the nosecone, and checklist after checklist being reviewed. The tension increased dramatically after the 11-minute de-orbit burn followed by the dangerous phase of the capsule meeting the atmosphere at high speed and high heat. Then came the blackout period, where communications and telemetry are unavailable during peak heating, but this was expected and is a normal part of spaceflight.

Communications were restored 42 minutes past the hour, predicted just like when they are lost. Shortly after, a series of parachutes were deployed to slow Endeavour to a gentile 15-ish mph for splashdown in the Gulf of Mexico, bringing a round of cheers in SpaceX’s mission control in Hawthorne, CA. The recovery ship GO Navigator and its smaller fastboats set off to secure Endeavour and lift it on to the deck for the crew to exit.

Exit from the capsule was hampered for a bit due to concern about a minor debris strike near the hatch and worries about lingering trace amounts of toxic hypergolic fuels. But after some minor delays, the issues were resolved and the hatch was opened for the crew to exit.

And with that, the Demo-2 mission comes to a close. Bob and Doug will be flown by helicopter back to land and NASA’s Gulfstream jet will fly them back to Houston, TX. As for Endeavour, it will be brought back to Kennedy Space Center to have its cargo unloaded and begin checks and refurbishment to be flown again. In fact, the whole mission will be thoroughly reviewed but no major issues are expected to be found and the first operational flight, Crew 1, is planned to launch in September.