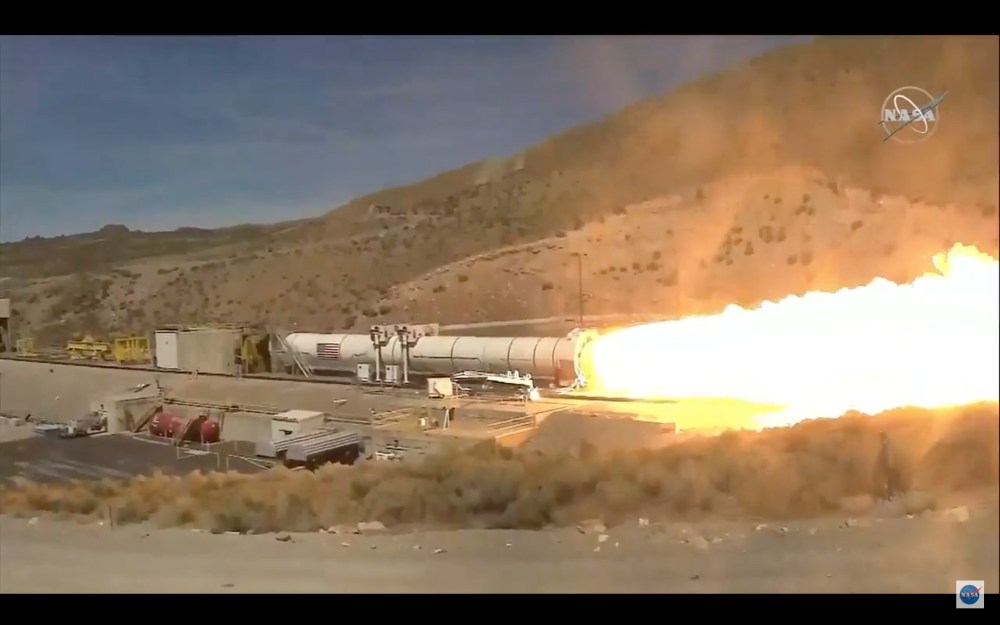 The first Solid Rocket Boosters (SRBs) for the inaugural flight of SLS may be done and ready for Artemis I, but NASA contractor Northrup Grumman continues to try to make it better. Today, they successfully fired an upgraded version of their booster for use in missions beyond Artemis III, presumably for deep space missions like Europa Clipper.

The SRB designs for the initial SLS missions are already complete. In fact, the first pair has already been delivered to the Kennedy Space Center and is being assembled for Artemis I. The current SRB design doesn’t differ much from the ones used for the Shuttle program. The most notable difference from then to now is the use of 5 segments instead of 4, with some segments having already flown in support of the Shuttle program. The last time one of those were test-fired was back in 2016.

Today’s firing, called FSB-1 (Flight Support Booster), is a test of improvements on the old design and new materials used in the manufacturing process. This test comes on the heels of a successful test firing of the GEM 63XL solid motor to be used by ULA, notably for their upcoming Vulcan launch vehicle. The static fire test saw the FSB fire at 3:05 p.m. EDT and run for 2:02 minutes at Northrup Grumman’s facility in Promontory, Utah. Once ignited, the booster needed to fire for its full intended duration, since solid-fueled rockets cannot be turned off on cue like their liquid-fueled counterparts.

In a post-test press teleconference, Bruce Tiller of NASA’s Marshall Space Flight Center in Huntsville, Ala., and Charlie Precourt of Northrup Grumman said that early reports show that the test was successful. A more comprehensive evaluation of the data from the test was already underway. They also expanded on the upgrades to this booster.

The first is a redesigned component of the steerable nozzle on the booster. The second is in the solid fuel itself. The aluminum perchlorate used in the fuel is coming from a new provider and the quality of their product needed to be evaluated. Finally, both said that the next big milestone for them will be the first flight of the new 5 segment boosters on Artemis I, tentatively slated for mid-2021.