Crew-1 talk about launch experience live from the space station 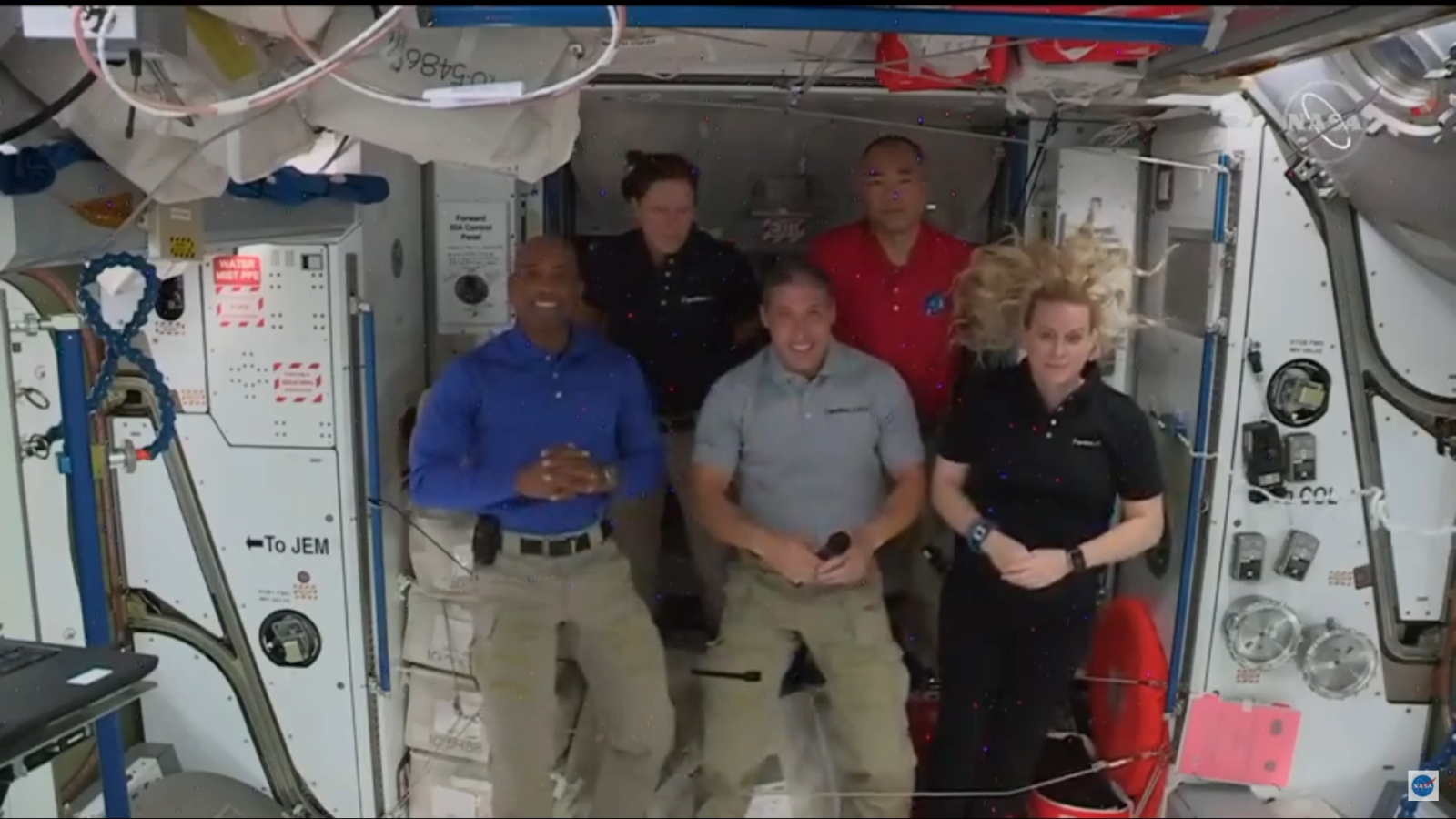 Part of the Expedition 64 conducted a news teleconference today from the International Space Station that was live on NASA TV. The conference included plenty of laughter, information, and microphone twirling.

SpaceX’s Resilience Dragon docked with the ISS late Monday night to the US side of the station. After docking, they were greeted by NASA astronaut Kate Rubin and Russian cosmonauts Sergei Kud-Sverchkov and Sergei Ryzhikov who had to switch their current sleep schedule to make sure they were awake for this event. This is the third time SpaceX’s crew dragon has autonomously docked with the space station, this time without needing to take any extra steps to test its systems.

The crew that attended this conference were Kate Rubin, Mike Hopkins, Victor Glover, Shannon Walker, and Soichi Noguchi. Crewmates talked about the flight on the Falcon 9 compared to what Bob Benkin and Doug Hurley mentioned after their DM-2 flight. Also, they mentioned what they expect from the coming 6-month stay on the orbiting outpost.

“It’s fantastic to be here, the launch itself was absolutely incredible. That vehicle really gets off the ground and so it was exciting all the way up and the ride was very smooth.

One of the many firsts that happened on this mission was that Soichi Noguchi from JAXA joined an elite group of astronauts that have flown on 3 different vehicles to space. Joined only by legendary astronauts Wally Schirra (Mercury, Gemini, and Apollo) and John Young (Gemini, Apollo, and Shuttle). Noguchi has now flown to the ISS on all three vehicles to be certified to fly to it, Soyuz, Shuttle, and now Dragon. He described the flight as “fun to ride” and that “two days in dragon are remarkable memories”.

I am very humbled and honored to fly three vehicles after Mr. John Young and also Wally Schirra but the good thing is many more are ready to follow. The race has just begun for who is going to fly 4 different ones.

Another first that happened was pilot Victor Glover’s first flight to space. After training in the astronaut corp since 2013 and dreaming of launching on the Space Shuttle, Glover was finally able to make the journey into space aboard Dragon. Talking about when he first got to look out the window down out at earth, he said: “It’s hard to describe it, there are no words to describe it. It was an amazing once in a lifetime feeling.”

Glover is a highly experienced Navy test pilot flying thousands of hours in high-performance jets. This time he was hands-off for flying. “30 months ago that was a big deal for me, I’ll tell you on the 15th, it wasn’t an issue at all” Glover said when asked how he felt about not physically flying the craft. Throughout the video conference, you can tell Glover is enjoying his time is zero gravity. Something he has worked to achieve for many years.