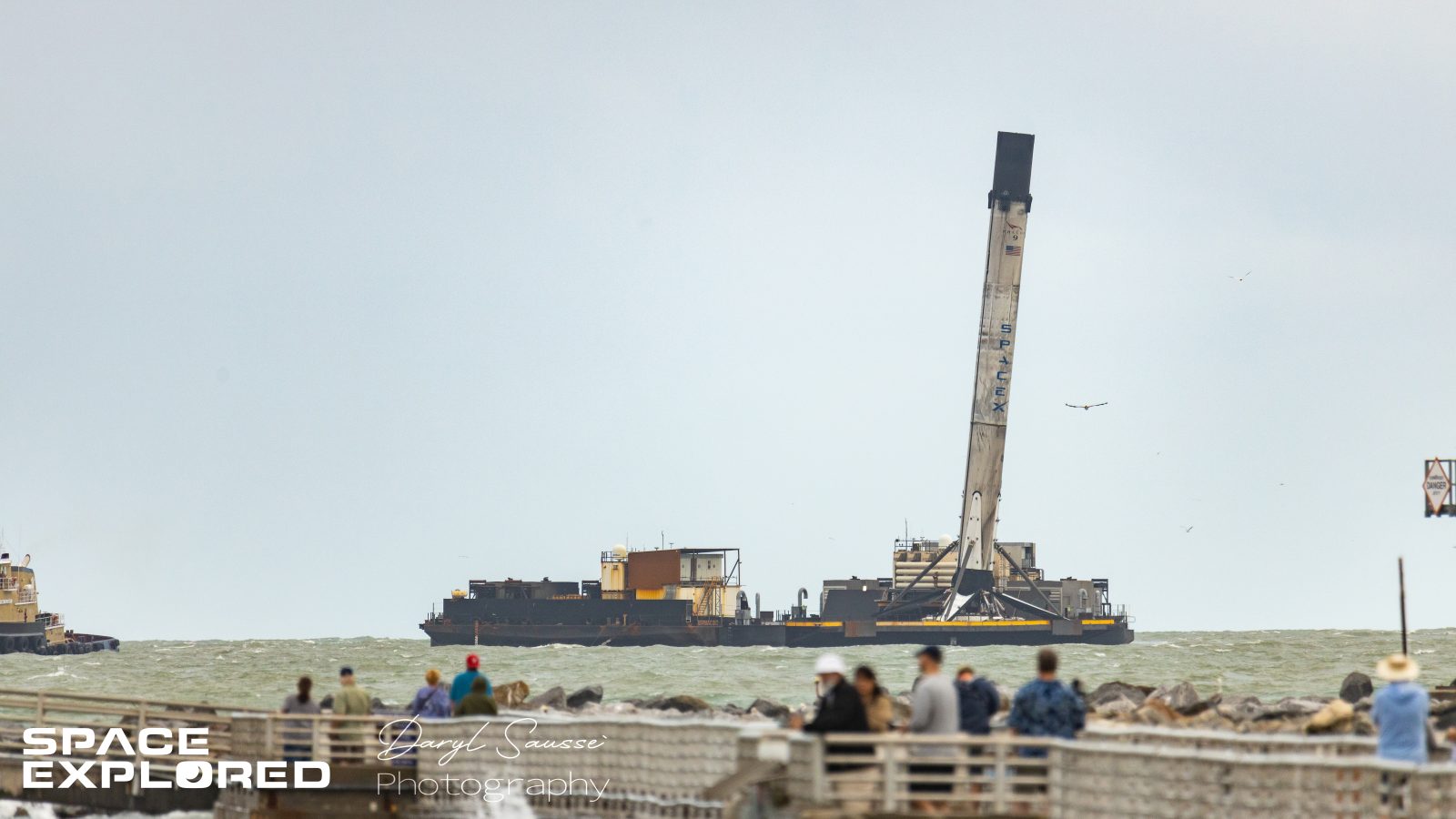 After its successful launch of the first operational crew mission for SpaceX, booster B1061 landed seemingly perfect on droneship Just Read The Instructions in the Atlantic Ocean. While it looked like a picture-perfect landing during the livestream, the booster was in a little less than perfect condition when it returned to Port Canaveral this morning.

We don’t get to see that many brand new boosters launch now that SpaceX has boosters flying as many as six times — and maybe as many as 10 times in the future. We’ll probably see less now that both NASA and the Department of Defense have given their approval to fly on flight-proven boosters. NASA’s Crew-1 mission was the last of SpaceX’s Commercial Crew launches that required a new booster.

Falcon 9 boosters used by NASA crewed missions and important scientific missions go through a more rigorous review before they leave their factory in Hawthorne, California. Though they are exactly the same as every other Falcon 9 booster, SpaceX and NASA are extra careful when people or billions of dollars and sometimes entire researchers’ careers are on top of rockets.

Sea landings can be rough

SpaceX has had an amazing streak of successfully landing boosters. It’s even more amazing when you think about how they get most of them back. Ideally, SpaceX prefers landing boosters back at its landing zones on land for quick turnarounds. In practice, most payloads need flight profiles that don’t give the booster enough fuel to return to land. Droneship landings in the Atlantic Ocean are much more common for this reason.

Right before a booster attempts its landing burn, the booster is found about 250 meters per second (about 560 mph) with its landing legs opening as late as possible. The engines cut out right when the velocity is at 0 — all at the right timing for the altitude to be inches above the deck. It’s honestly a miracle they can do it once, let alone 45 times and counting.

Because of rough seas, boosters sometimes move around or outright fall over. Recovery weather used to be a secondary concern, but now weather in the zone where SpaceX’s droneship awaits can push missions back.

This most recently happened for Crew- when it was determined SpaceX wouldn’t be able to land the booster given weather conditions. NASA and SpaceX moved the astronaut launch from Saturday to Sunday to increase the likeliness of a successful booster recovery.

Even though seas were determined to be safe for recovery, it doesn’t mean they were anywhere close to ideal. The recovery crews still face waves that can make hardware like boosters shift during the voyage, and today’s booster return demonstrated that.

Each leg has the ability to take a significant impact on the deck. We’ve seen several previous boosters take a slight bounce after landing. Crush core centers are something that SpaceX has added into the legs for this reason. These allow the legs to take a serious amount of force without experiencing severe damage. This is what is most likely caused today’s booster to have a lean when it came into port this morning.

It’s unclear what could have caused the leg to take this much extra force. Usually, boosters are secured to the deck shortly after landing to make sure they do not move around excessively. We’ve seen this cause damage to the legs and nearly cause the booster to fall over.

Previously crews would have to physically weld the legs to the deck before leaving to secure the boosters. Now SpaceX employs two special robots called Octograbbers that can reach into the engine section (called the octoweb, hence the robot’s name) and hold onto it. Crews still need to arrive and further secure it for transportation, but the Octograbber makes it much safer and faster to return a booster home.

Crews have to do these operations during the day for safety reasons, so no one actually saw the booster until Monday morning.

When the booster landed on SpaceX’s droneshop JRTI, it was in the center of the deck and looked to be level — assuming the camera on the deck wasn’t offset. Whatever happened to the booster must have happened before it was secured. Wind and waves could have moved the booster close to the edge overnight before crews and Octagrabber could secure it. Whatever happened, it certainly caused a scene at the port when it entered, being dubbed the Leaning Tower of Port Canaveral.