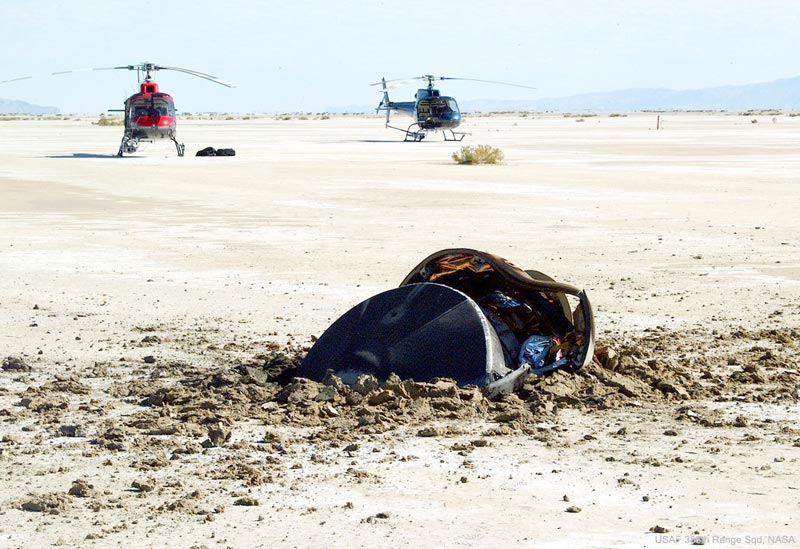 On November 4, 2018, NASA’s Astronomy Picture of the Day was titled “Flying Saucer Crash Lands in Utah Desert” and was accompanied by a fitting image. Unfortunately, the image showing a mangled disk in the middle of the desert had nothing to do with extraterrestrials, but it did have quite a fantastic story behind it.

Back in 2001, NASA had launched the Genesis spacecraft to study and gather samples from our Sun’s solar winds. The hope was that understanding our Sun’s composition would allow us to better understand what elements were present when our solar system’s planets were formed.

When Genesis had successfully captured samples, it sent a return capsule back towards Earth so that the samples could be studied up close. However, the return capsule did not return to Earth as expected; instead, it violently crash-landed in a desert in Utah at 193 mph.

The return capsule was supposed to enter the Earth’s atmosphere and deploy a parachute to slow its descent, but that parachute never deployed. This error was caused by a set of g-force sensors that turned out to be installed backwards, causing the parachute to never be signaled for deployment.

Due to the intense crash, many of the arrays containing the valuable samples were breached and contaminated, ultimately being rendered useless. The other undamaged arrays still contained samples that were able to be studied, later resulting in the publishing of multiple research papers.