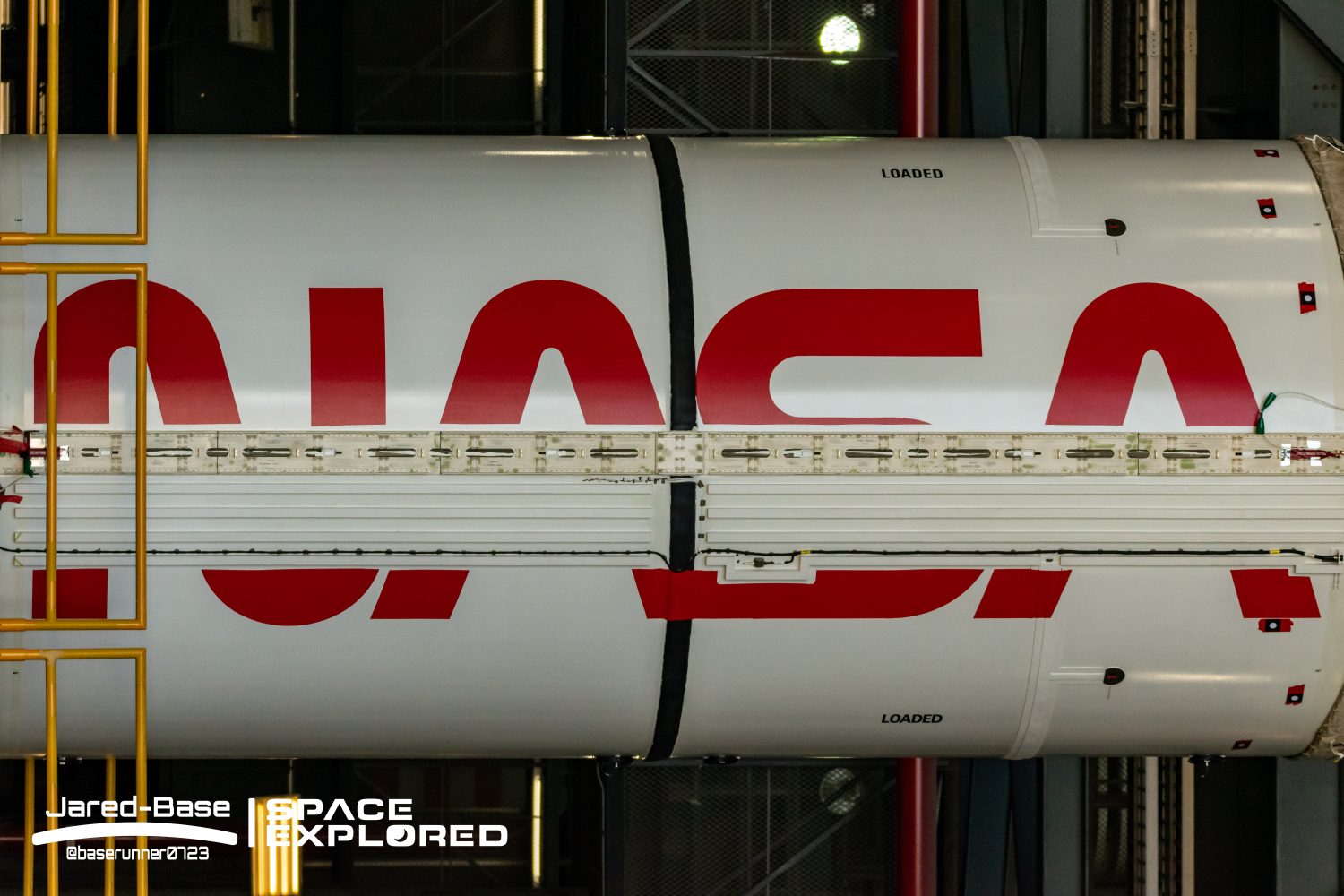 NASA invited media to Kennedy Space Center to witness the progress being made with the stacking of the SLS Solid Rocket Motors and to see the Orion Crew Capsule as it is being prepared to be moved to one of the final processing facilities before being stacked later this year.

This hardware is being readied for NASA’s Artemis I mission that will fly the Orion spacecraft using the Space Launch System rocket as early as November 2021. The uncrewed flight will be the first mission around the Moon before astronauts are onboard Orion for Artemis II, and astronauts will reach the Moon for Artemis III.

Inside the Vehicle Assembly Building

The day started off with media going to the Vehicle Assembly Building (VAB) to see the progression of the SLS Solid Rocket Booster (SRB) stacking. This is the first of the final preparations before having a completed SLS rocket and the most critical point.

Once ground crew commence booster stacking there is a 365 day deadline to launch, as confirmed by a NASA Public Affairs official at the event. This deadline is created by the stacking process itself. It’s a labor intensive process that requires, essentially, epoxying the SRB segments together. This epoxy that is used will begin to degrade over time and may not be viable past a year.

Media was then brought to the Neil Armstrong Operations and Checkout Facility to view the Orion Crew Capsule before its protective covers are put in place ahead of the move to the Multi-Purpose Payload Facility (MPPF) on January 16th, 2021 (check back here to see coverage of this move!).

Media was instructed to turn on airplane mode on their phones before entering the high bay where the Orion Crew Capsule was located due to concerns of RF (Radio Frequency) contamination. The Orion Crew Capsule is loaded to the brim with very sensitive sensors that could be interfered with should there be RF noise.

The next step for the Orion Crew Capsule ahead of Artemis 1 will be moving to the MPPF where it will have final closeout operations. This includes the installation of batteries and fueling of tanks just to name a couple.

Operations & Checkout Facility to the MPPF: The Orion Move

Media arrived outside the Neil Armstrong Operations and Checkout Facility Saturday morning to witness the transport of the Orion Crew Capsule from the O&C Facility to the MPPF. There was an initial delay to the move out but an hour or so later, it exited the facility.

The process for the move is complex and requires many checks, one of those being the Environmental Control System (ECS).

The ECS feeds the Orion Capsule clean, inert gas to keep the cabin clear from particulates that could contaminate systems. When they move the capsule they have a mobile ECS trailer to continuously feed the capsule.

Once the capsule moved out of the facility, they paused to switch ECS systems. This is where things stopped for around 5-6 hours. They were having issues getting good flow through the capsule. Had they not fixed the issue, they would have had to roll back to the O&C Facility.

The media pool stayed for as long as we could but eventually left not knowing if the move would continue. Later in the day, the Orion Capsule arrived at the MPPF