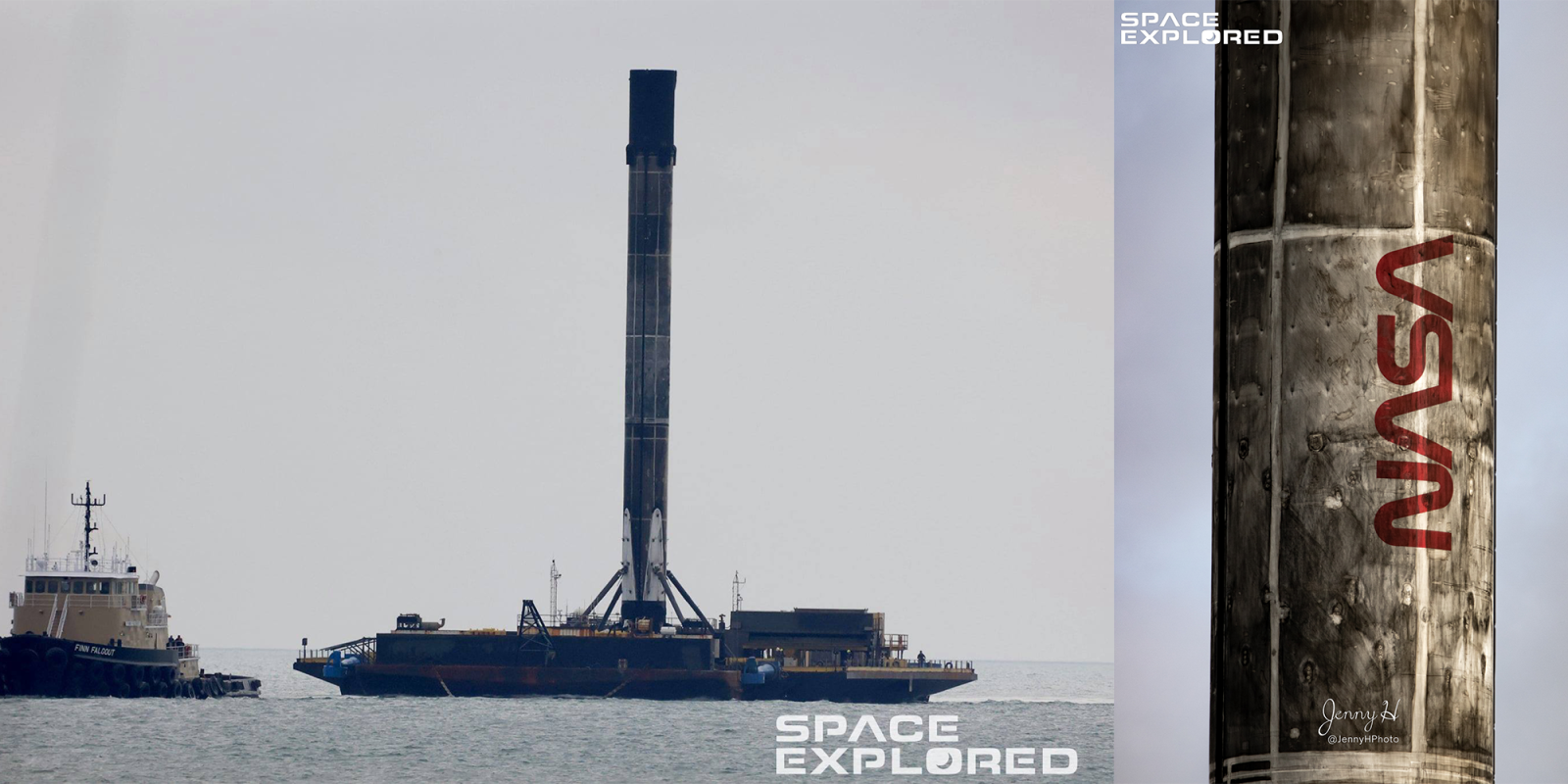 Port Canaveral in Florida is the homeport for cruise ships, fishing vessels, the U.S. Coast Guard and Navy, and yes, SpaceX’s rocket recovery efforts. On Tuesday, SpaceX brought in a special Falcon 9 first stage rocket booster to the port after a quick return from flight. Teams also moved out SpaceX’s life leading booster from the docks and back into Cape Canaveral Space Force Station to get ready for its next flight.

SpaceX lands their first stage rocket boosters vertically using landing legs, and vertically standing with legs deployed on a droneship is how they return. Held in place by SpaceX’s Octagrabber robot, teams board the droneship and quickly prepare the booster version B1051 to be hoisted up by the dock’s crane before retracting the landing legs.

Once hoisted in the air, teams move the booster to be horizontal and place it on SpaceX’s transporter vehicle. The vehicle they use has a long history of moving spacecraft around Cape Canaveral. It was actually the old Space Shuttle transporter used to move orbiters from the runway to their processing facilities. B1051 was laid down and on its way out shortly before the Transporter-1 mission booster called B1058 made it into port.

Even though Port Canaveral has seen plenty of booster returns in the past, and it looks like this is their main gig, this is still a side operation for the port. Several other businesses have priority to enter the port before SpaceX including cruise ships and military vessels, and that exactly what we saw Tuesday.

Trident Warf is the Navy’s dock in Port Canaveral which offers direct access to Cape Canaveral Space Force Station and the Naval Ordinance Test Unit. Every so often, U.S. Navy submarines make visits to the Warf before heading back out to sea.

Early yesterday morning, we saw a U.S. Navy sub towed into port before being turned around back out to continue its mission in the Atlantic roughly 90 minutes later. Usually when large vessels like these enter or leave port, crafts other than small fishing boats cannot enter. SpaceX’s droneship Of Course I Still Love You had to sit tight anchored out at sea while the sub conducted its business.

Once the sub was out and the tug boats were free, SpaceX was able to continue bringing in the special booster that flew not just the first dedicated rideshare mission but also the first astronauts in SpaceX’s Crew Dragon spacecraft. This is the same booster that made its debut flight on SpaceX’s DM-2 mission for NASA that sent Doug Hurley and Bob Behnken to the ISS. It also being the only Falcon booster to sport the iconic NASA worm and meatball logos on its side which can still seen today.

This was SpaceX’s third booster return from the sea already this year, and we will be getting two more in the coming weeks as SpaceX plans to launch their 17th Starlink mission on Saturday and their 18th Starlink mission a week from tomorrow. Both missions require droneship landings.

Saturday we will see the second 7th flown booster, B1049, conduct its 8th flight.This year is adding up to be a huge one for SpaceX’s launch, recovery, and reuse goals.