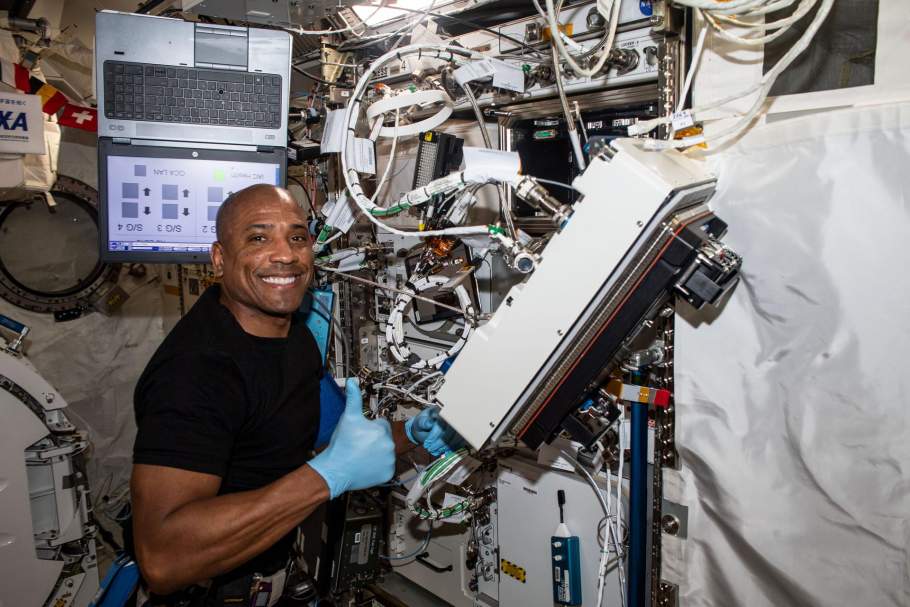 Victor Glover, a NASA astronaut and current resident of the International Space Station, spent time taking questions from students about training to be an astronaut and what it is like living and working in space.

There are many space suits that have been used in space flight history, and even today there are several different versions used for certain tasks. The sleek white spacesuits used by astronauts when they fly on the SpaceX Dragon are probably the most popular today, although those are just used while inside the spacecraft during flight to and from the ISS.

Boeing and NASA each have their own versions for their respective spacecraft too. Although not as eye catching as SpaceX suits, they all do the same thing. Their purpose is to provide needed protection to the astronaut in case their vehicle depressurizes. While they are great for inside the vehicle, you wouldn’t want to go outside the vehicle with these. That’s where the extravehicular mobility unit (EMU) would come in handy.

The EMU is like a mini spacecraft. It has everything an astronaut would need while outside the vehicle. These suits are much more complex than the ones used in flight. They have multiple layers, each with their own job to do to keep them safe.

Victor Glover explained the different parts of the suit starting wtih the cooling layer of the suit. It’s used to keep the astronaut cool during long spacewalks where even small tasks take a larger amount of effort than it would on Earth.

It’s not just about keeping the astronaut cool. Some parts need to be kept warm, like hands. NASA inserts heaters in the tips of the fingers of the gloves to help keep dexterity so astronauts can handle tools better. The suit provides oxygen for the astronaut to breath, pressure, radiation protection, and communications. In other words, everything a spacecraft does, but it just fits one.

NASA astronauts go through survival, medical, and technical training to be able to master all the skills needed to go to space. Glover mentioned that astronauts need more than just tough skills. They need soft skills like public speaking and team work since astronauts are part of a small team and need to work together to conduct experiments and handle public affair events on their own.

Glover was asked if applicants need to be in the military to become an astronaut. He explained that this is not the case anymore. While most astronauts are former military, and originally in the early space program that was a requirement, NASA is currently looking for individuals who hold degrees in STEM related fields or similar work experience. All the astronauts on SpaceX’s Crew-1 mission hold at least a masters degree in science fields. Glover expressed that he feels he has been “studying for 44 years” to become an astronaut.

The story of astronauts bringing toys into space to indicate when they have gone into zero gravity goes back to Yuri Gagarin when he brought a doll with him on his first flight. Since then, many indicators have been brought up on missions to give astronauts the clue that they have reached orbit. That’s why Baby Yoda hitched a ride to space with Crew-1.

The human body in space

Another question that Glover was asked was if muscles work differently in space than they do here on Earth. While Glover explained they don’t technically work different in space, they do have to get use to working in a zero gravity environment. Glover said that since astronauts and objects in the ISS are experiencing constant free falling while in orbit, everything is weightless and doesn’t need as much force to pick up or move. He said this just takes time to relearn how to function, but they do have to continue to workout.

Extended time in zero gravity isn’t good for the body if you are just laying around. Astronauts have a rigorous workout routine and diet that help counteract the effect that weightlessness has on the human body for short term missions, but NASA still has to study the long term effects that this has on the body.

Glover shared three tips for those wanting to become astronauts. First he said “be resilient”, not letting things stop you from doing what you want. Second is “become a life-long learner”, or always find ways to learn from life experiences; even when you finish school, learning doesn’t stop. Third and finally is “be a good teammate”, as teamwork is something engraved in the history of NASA. From mission control to spaceflight crews, being able to work in a team is a needed skill in the space industry.

“I believe that the same teamwork used by us at NASA to investigate extreme weather patterns and to help unlock the secrets of the universe can be used to solve our most pressing issues here on Earth. If we hope to solve humanity’s most important problems, we must work together. We need each other.”