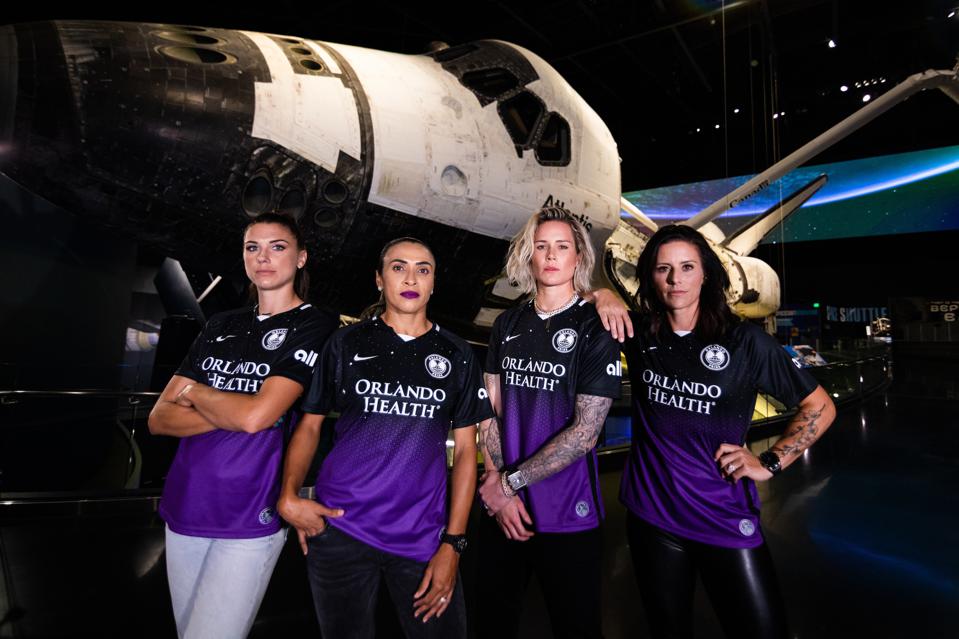 Orlando Pride unveiled on Wednesday their new jersey for the 2021 and 2022 seasons. It was released on the final day of women’s history month. The “Ad Astra” kit will serve for the next two seasons pays tribute to Central Florida’s Space Coast.

The Orlando Pride soccer team took one small step closer to the stars and one giant leap for women’s inspiration of breaking barriers and culture-shifting. The jersey labeled “Ad Astra” Kit, which means “To The Stars” in Latin. This pays tribute to the trailblazing women who helped NASA get to space but received no credit at the time.

Players Alex Morgan, Ashlyn Harris, Ali Krieger, and Marta Silva took part in the impressive photoshoot at Kennedy Space Center, which is home to the only spaceport in the world where man has left Earth and landed on the Moon. KSC is just a short trip away from The Exploria Stadium the home of the Orlando Pride.

“It’s really just paying tribute to the women who’ve broken all these barriers, who are trailblazers at this point who inspired an entire generation of women to do these incredible things that, maybe a long time ago, they thought men were in these roles. I think the whole entire platform of what Orlando, like Orlando City and Orlando Pride, is doing it’s just been an incredible nod at a lot of incredible women.

Details of the kit design are also designated as symbols of the aerospace industry and the contributions of black women to the space program. The jersey sports a patch in the shape of the Project Mercury capsule and the outline of Katherine Johnson’s calculations. The upper half of the kit includes outlines of three stars, which symbolize the “Hidden Figures” women.

Alongside announcing the new kit, the team sent the kit and a ball to the edge of our atmosphere on a high-altitude balloon, which eventually popped and which brought the ball and jersey back to Earth’s surface. The ball that was sent about 50 miles above the surface is planned to be used to kick off their home opener in May.

“Ultimately I’m just proud of our investments. It’s not just resources and finances towards this, it’s our investment of time that has allowed us to arrive at this point to have such a special kit with special meaning. When you’re wearing it, it represents more than just a club.”

For the first time since 2019, the Orlando Pride will begin hosting fans in their stadium with a limited audience for the second game of the NWSL Challenger Cup on April 14th. This preseason tournament will be followed by the start of the regular season in May.