Rough seas to blame? Another SpaceX booster returns to port leaning to one side 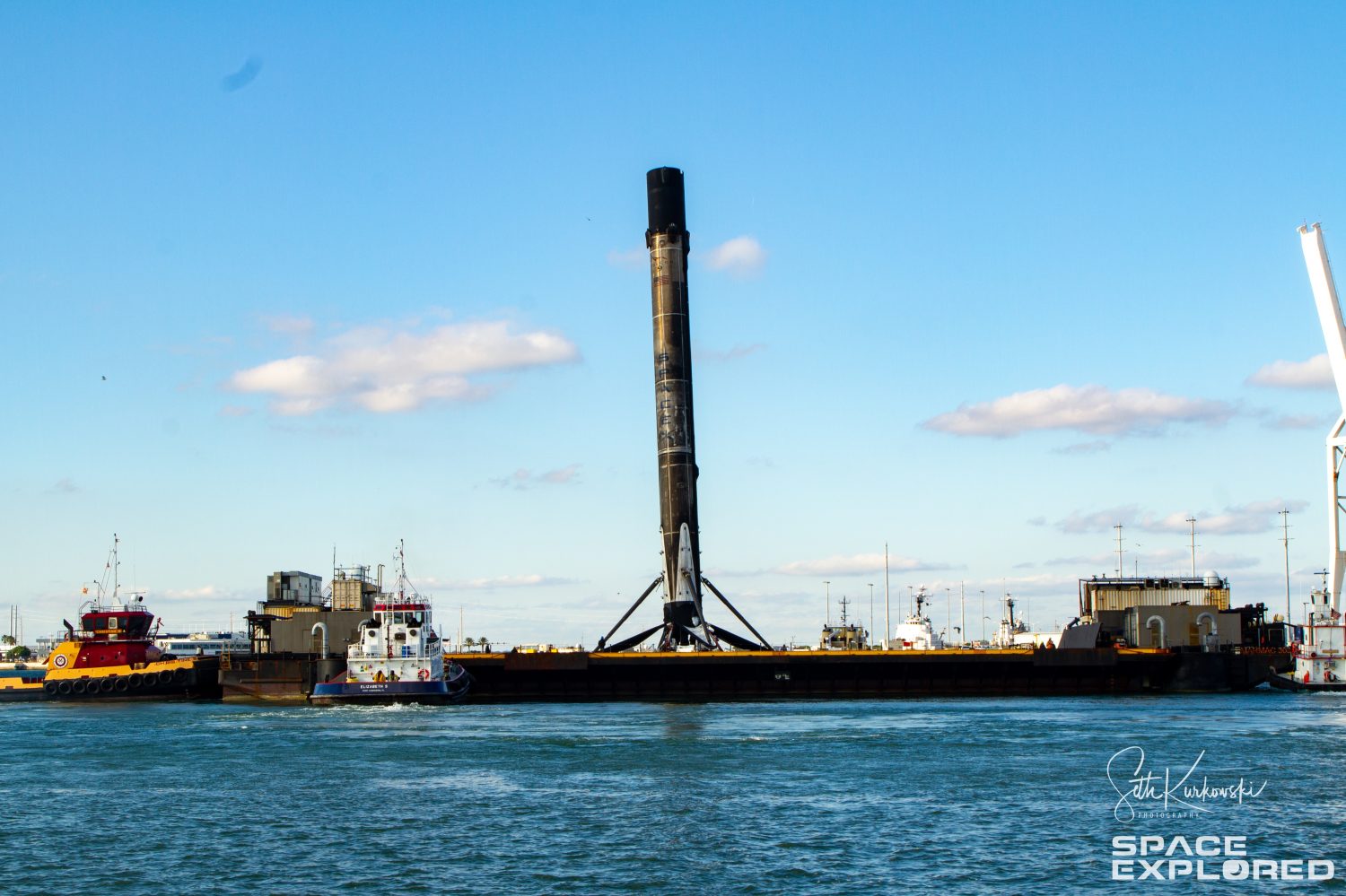 After the launch of SpaceX’s second 7th-time-flown booster and a seemingly perfect landing, the booster returned to Port Canaveral yesterday looking well scorched (as expected) and leaning (not exactly expected). This is the second booster that has seemed to have a rougher than normal return from its landing zone in recent weeks.

After SpaceX successfully lands its first stage booster on one of their droneships, crews that travel out on support ships have to board it to be able to begin securing it. A robotic vehicle called Octagrabber holds onto the booster to make sure it doesn’t move around while seas toss and turn.

There must have been some issue trying to secure the rocket booster or something else, possibly due to the weather. What happens out there is truly a mystery still to most since SpaceX doesn’t comment on its procedures. Whatever happened, the booster went from a seemingly normal landing stance, as seen during the launch stream, to leaning over with one of its legs off the ground.

SpaceX’s goal when landing its boosters is to hit zero on their velocity just before the landing legs touch the deck or ground of the landing zone. That’s not always possible however. Vertically landing boosters is still a very difficult task. Not all missions are the same, so sometimes they land a little harder than planned.

This is why SpaceX implements a piece of technology called “crush cores” into their legs. These are one time use structures in the legs that when enough force is applied to them, they will crush down to absorb the force without transferring force into the vehicle itself.

From what we know, it looks one of the crush cores in one of the legs bottomed out, which explains the lean. This can be caused by an uneven landing due to a wave, although it didn’t look to be like that on stream — although rough seas after the landing could also cause this. The latter is most likely the cause of the lean since it seems to have also shifted over quite a bit from it’ original landing position.

With the one crush core leg being so low, it’s unsure if there was any structural damage that could have been caused and would force more extensive repair before being flown for an eighth time. This is one of SpaceX’s life leading boosters and the first life leader to be flown by a commercial partner instead of an internal Starlink mission. SpaceX has said that the Falcon 9 can launch up to 10 times before major refurbishment is needed, and we are getting very close to testing that theory in practice.

SpaceX is wrapping up the 2020 launch manifest with only one more scheduled launch to take place on Saturday morning. We are likely to see this booster and the other life leading boosters pushed further into their life span in 2021 — potentially achieving Elon Musk’s goal of launching a rocket stage as many as 10 times.