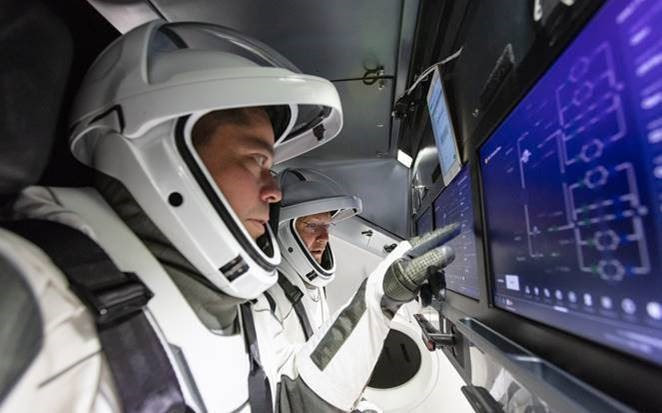 Earlier today, the nominees for the 48th annual Daytime Emmy Awards were announced. Among the nominees, was the Discovery and Science Channel’s coverage of the United States’ historic return to Crewed Spaceflight last year, Demo-2.

SpaceX’s Demo-2 flight carried astronauts Bob Behnken and Doug Hurley to the International Space Station in a Dragon Capsule. This was the first crewed flight from US soil since the Space Shuttle was retired in 2011. Discovery’s Demo-2 coverage with the program “SPACE LAUNCH LIVE: America Returns to Space” provided in-depth interviews with experts in the field of spaceflight, including Elon Musk and numerous astronauts. The program also featured big-name celebrities with the likes of Katy Perry. This combination of celebrities and in-field experts allowed the program to reach a wider audience, to build valuable public support for space exploration.

The full press release can be read below.

(LOS ANGELES) – Discovery and Science Channel have been the leader in covering space’s most incredible and historic moments. Today, Discovery and Science Channel received 2 Daytime Emmy® nominations for the 2021 Daytime Emmy® Awards for ‘SPACE LAUNCH LIVE: America Returns to Space.’ The live multiplatform event was nominated for both Outstanding Daytime Special Event and Outstanding Technical Team. Last May, Discovery and Science Channel set ratings records with their live coverage of, and extensive access to, the NASA launch of SpaceX’s Crew Dragon capsule. ‘SPACE LAUNCH LIVE: America Returns to Space,’ was simulcast coast-to-coast and captured the first crewed space mission to be launched into orbit from U.S. soil since 2011. The multiplatform event also featured some of the biggest names in entertainment with live appearances by global superstar Katy Perry and other celebrity guests. It also included expert insight by former astronauts Mike Massimino and Karen Nyberg; active astronauts Jessica Meir and K. Megan McArthur and; former NASA Administrator Jim Bridenstine as well as an interview with Astronaut Chris Cassidy from the International Space Station (ISS). The live broadcast and an accompanying two-hour documentary were made in partnership with The Washington Post and staff writer Christian Davenport, whose depth of experience allowed him to gain inside access to key players – including a rare in-depth interview with SpaceX Founder and Chief Engineer Elon Musk. TV personality Chris Jacobs hosted the three-hour special live from Los Angeles and Emmy Award-winning journalist David Kerley reported on the ground at Kennedy Space Center. The 48th annual Daytime Emmy Awards will air on Friday, June 25 from 8-10 p.m. ET on CBS and ViacomCBS’ streaming service Paramount+.