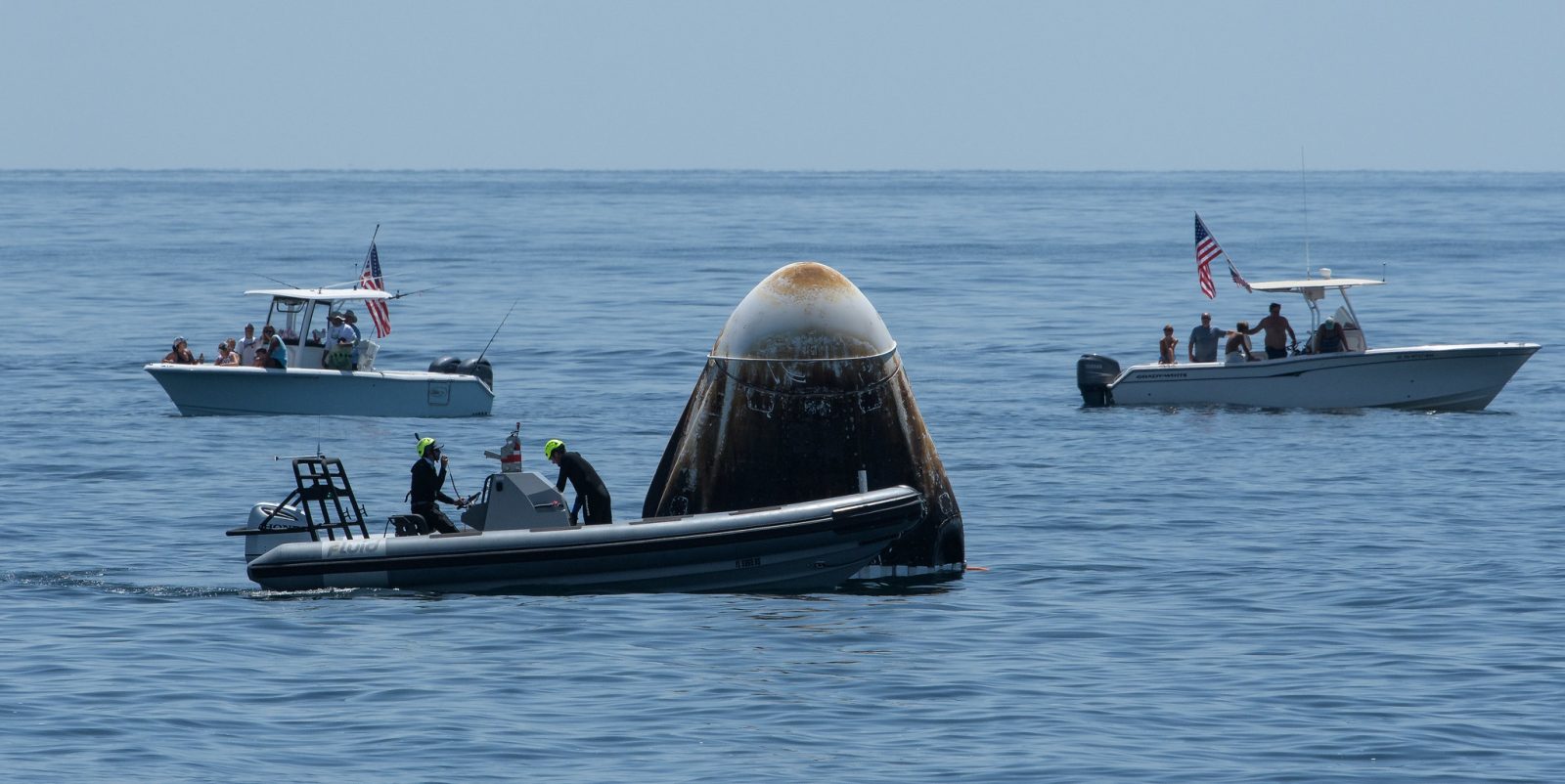 NASA astronauts Bob Behnken and Doug Hurley helped SpaceX make history today when the duo became the first humans to splashdown in the Gulf of Mexico inside a Crew Dragon capsule. The return to Earth from the International Space Station concluded a months-long demonstration mission to certify the Falcon 9 rocket and Crew Dragon spacecraft for routine human spaceflight missions.

The first U.S. astronaut splashdown in 45 years didn’t go without an unexpected bit of turbulence however — just not for the crew of the new spacecraft. Despite a 10-mile safety zone created by the U.S. Coast Guard on behalf of NASA and SpaceX, a worrying number of boats formed a fleet of intruders around the perimeter of the splashdown site on Sunday.

NASA, SpaceX, and the Coast Guard responded to concerns about the uninvited boaters after the dangerous spacecraft splashdown and astronaut recovery effort was completed. Based on social media posts discovered after the incident, local boaters involved in the activity appear to have coordinated their arrival prior to the splashdown despite local warnings to maintain a safe distance.

In fact, it appears that official warnings to respect the secure zone and keep boaters out of the targeted splashdown zone are what first tipped local boaters to the location of the astronaut recovery site.

A local community group with over 100,000 followers on Facebook publicized two marked off areas near Pensacola and Panama City on Friday. The locations were included in a graphic intended to warn boaters to stay away from either potential splashdown site.

Instead, a small fleet of boaters appeared to have banded together to defy FAA and Coast Guard orders to avoid both potential splashdown sites on Sunday. Social media posts from early Sunday morning show boaters planning to arrive at the splashdown site despite official notices to avoid the surrounding area.

Other posts on social media include boaters ignoring a known 10-mile security radius around the perimeter of the splashdown site and outnumbering Coast Guard boats who were not prepared to remove the boaters. One boater described NASA, SpaceX, and the Coast Guard as “drama queens” while arguing that no one was in the way of the astronaut recovery effort.

NASA and SpaceX acknowledged on the live video feed that the capsule hatch needed to remain closed for longer than planned due to the need to purge a hazardous gas associated with spacecraft returning from space through the Earth’s atmosphere. SpaceX crew wearing personal protective equipment used special tools to measure and remove the nitrogen tetroxide presence from around the spacecraft before the two NASA astronauts could safely exit the capsule.

Both NASA and SpaceX representatives explained that the United States Coast Guard was called upon to protect the splashdown site while they focused on their mission to safely retrieve the two astronauts from the spacecraft. Both parties also acknowledged the need for more robust security measures for future missions.

The Coast Guard responded to the incident separately, citing multiple measures to inform boaters of the restricted safety zone. According to their statement, a Broadcast Notice to Mariners was issued on July 29 at which point the Pensacola splashdown site was one of seven potential locations.

Two boats including an 87-foot patrol boat and a 45-foot response boat were also in the region to alert boaters to a potentially dangerous operation occurring within a 10 nautical mile radius. The Coast Guard also issued a radio broadcast two hours prior to the scheduled splashdown, but the effort fell short when local boaters formed a small fleet intended to defy the safety zone orders.

With limited assets available and with no formal authority establish zones that would stop boaters from entering the area, numerous boaters ignored the Coast Guard crews’ requests and decided to encroach the area, putting themselves and those involved in the operation in potential danger.

While the Coast Guard has the legal authority to board vessels and enforce las past the 12-mile navigable waterways rule, it would have required a massive undertaking of resources to engage each boat that came into the area and suspend their voyage or otherwise escort them out. […]

A comprehensive review of this operation will be conducted between the Coast Guard, NASA, and SpaceX, and the development of lessons learned will be our next priority moving forward.

Fortunately, no boaters or crew were injured during the unexpected interruption to the operation.

However, the incident does show the need for public safety education as it relates to spaceflight and splashdowns as recovery efforts like this become more routine.