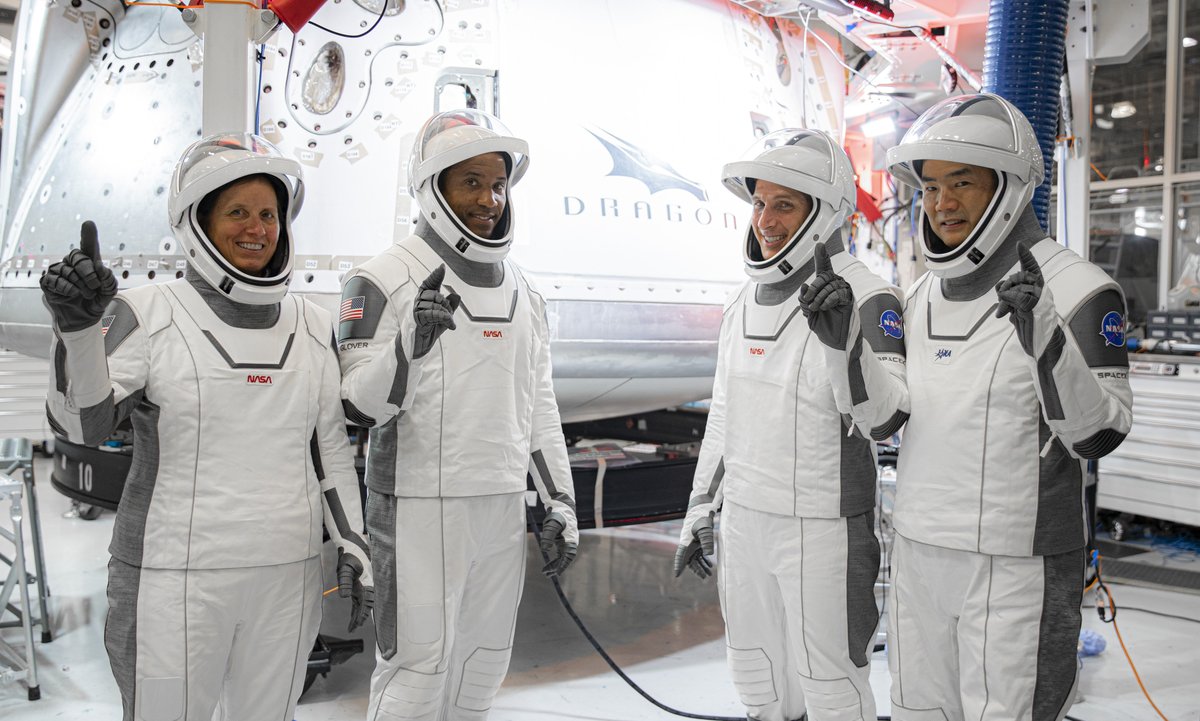 October 10, 2020: Crew-1 mission now targeting no earlier than early-to-mid November for liftoff. SpaceX will use the additional time to resolve an issue discovered on a non-NASA mission. Original story below.

Four astronauts will leave Earth for a six-month stay on the International Space Station shortly after midnight in the early hours of Halloween morning. NASA astronauts Shannon Walker, Victor Glover, and Mike Hopkins and JAXA astronaut Soichi Noguchi will serve on the SpaceX Crew-1 mission.

The upcoming mission is a major milestone for NASA, SpaceX, and American spaceflight capabilities.

NASA’s Commercial Crew Program was established in 2011 to outsource launch providers to private companies after the Space Shuttle Program ended.

SpaceX successfully completed its Demo-2 mission under the program with NASA astronauts Bob Behnken and Doug Hurley earlier this year. The NASA astronaut duo launched from Kennedy Space Center in Florida inside a SpaceX Crew Dragon capsule atop of SpaceX Falcon 9 rocket. The mission marked the return of human spaceflight capabilities to the United States after eight years.

After a successful launch and docking with the ISS, Behnken and Hurley spent several weeks aboard the space station before safely splashing down inside Dragonship Endeavour in the Gulf of Mexico.

The successful demonstration mission certified SpaceX for future astronaut missions while relieving NASA of its reliance on Russia’s space agency for sending astronauts to space.

The upcoming Crew-1 mission will be the first operational mission and only the second mission for SpaceX involving humans. Crew-1 will also include several firsts:

The Crew-1 mission will also be NASA astronaut Victor Glover’s first time in space, and Glover will become the first Black astronaut to serve as International Space Station crew in the station’s nearly 20 years of operation.

All four Crew-1 astronauts paused their training in Houston, Texas, on Tuesday to hold a press conference one month before liftoff:

NASA astronaut Mike Hopkins revealed the name Resilience for their SpaceX Crew Dragon spacecraft during the press conference. All three NASA astronauts also shared that they plan to digitally vote in the upcoming US election from space alongside NASA astronaut Kate Rubins.

Rubs will relieve NASA astronaut Chris Cassidy from his role as the sole American aboard the ISS on October 14. Cassidy and his two cosmonaut colleagues will depart the space station and return to Earth on October 21. The Crew-1 astronaut quartet lifts off on October 31 at shortly after 2 a.m. The crew will live and work aboard the ISS through April 2021.

SpaceX will also continue to send supplies to the International Space Station through its Commercial Resupply Service contract with NASA. The private space exploration company showed off its upgraded Cargo Dragon spacecraft with redesigned solar arrays and new avionics:

The return of human spaceflight capabilities to the United States also means NASA can maintain more astronauts on the American side of the International Space Station starting with the Crew-1 mission. Crew Dragon is the first capsule to support four astronauts; Russia’s Soyuz spacecraft, which will continue to fly, packs up to three people inside tight quarters.

Oh, and NASA and SpaceX promise more security and no boat crashers when Crew-1 splashes down off the coast of Florida next spring.