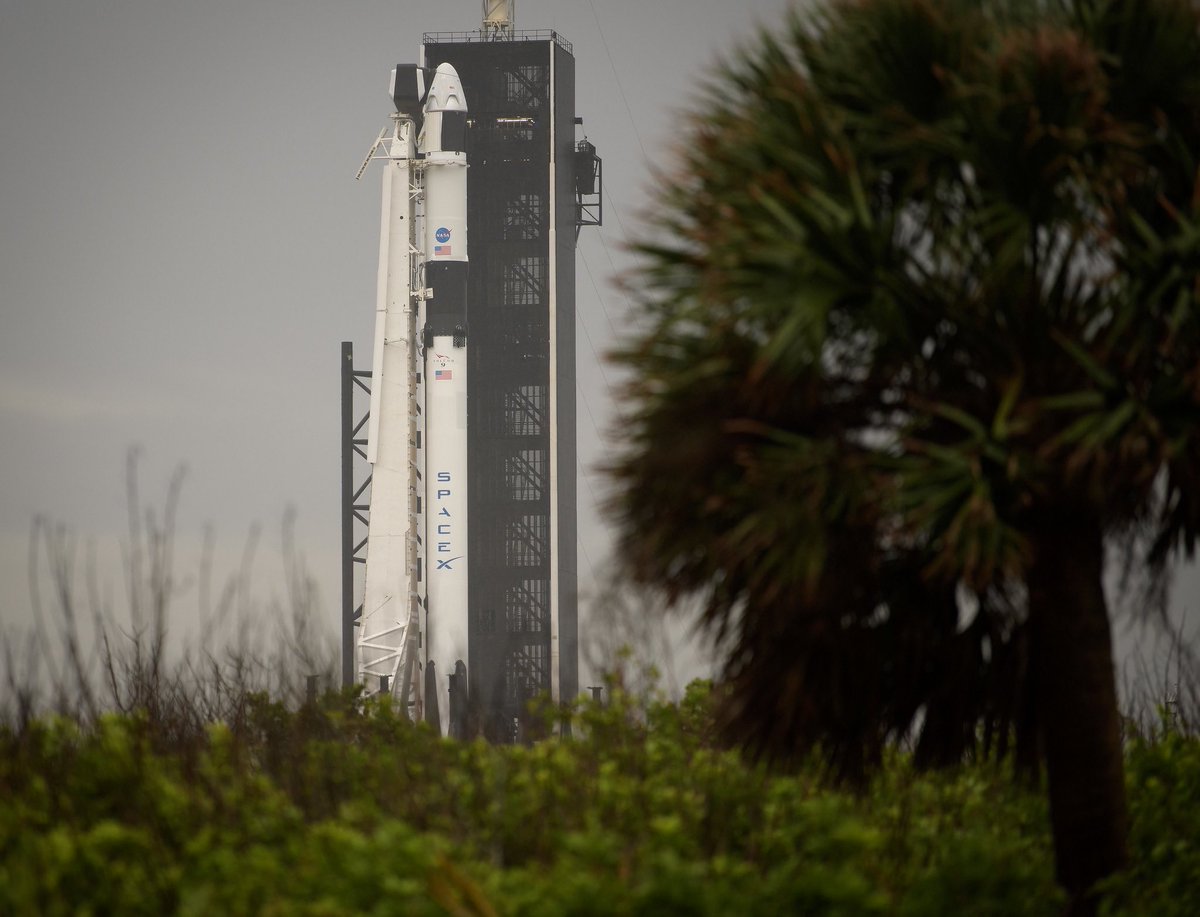 SpaceX called off the first launch attempt on Wednesday due to weather concerns. The next attempt will be on Saturday, May 30, at 3:22 p.m.

SpaceX is sending humans to space for the first time this week in a historic mission called Demo-2 for Elon Musk’s space exploration company. The crew consists of two NASA astronauts, Bob Behnken and Doug Hurley, who previously flew on space shuttle missions. The crewed test flight will mark the return of human spaceflight capabilities in the U.S. for the first time in nearly a decade.

From how to watch to why it matters, here’s what you need to know:

SpaceX is also covering the event live on YouTube:

NASA astronauts Bob Behnken and Doug Hurley will be transported from the Neil Armstrong Operations and Checkout Building at Kennedy Space Center inside a Tesla Model X, the official astronaut transportation vehicle for SpaceX. Behnken and Hurley will arrive at Launch Complex 39A in Cape Canaveral, Florida.

Astronauts Bob Behnken and Doug Hurley will be the first humans to ride inside a SpaceX Crew Dragon spacecraft to travel to space. A SpaceX Falcon 9 rocket will liftoff from LC-39A to send the NASA astronauts to orbit on the 19 hour journey to the ISS.

The goal of the Demo-2 mission, or DM-2, is to send astronauts Bob Behnken and Doug Hurley to the space station and safely return the astronauts back to Earth.

Behnken and Hurley will join Expedition 63 Commander Chris Cassidy, the lone American astronaut aboard the ISS, for an undetermined mission duration to assist with space station duties. Cosmonauts Anatoly Ivanishin and Ivan Vagner currently occupy the Russian side of the ISS.

The mission objective is specifically to certify the SpaceX Crew Dragon spacecraft as human-rated for NASA’s Commercial Crew program. Demo-2 is considered a test flight and not an operational flight. Demo-1 consisted of an uncrewed mission to and from the ISS using a Falcon 9 rocket and Crew Dragon spacecraft.

While the Demo-2 mission is historic in many ways, NASA administrator Jim Bridenstine has strongly encouraged the public to stay home to view the launch due to the COVID-19 pandemic.

NASA has provided multiple avenues for viewing and participating in the Demo-2 mission from home. NASA and SpaceX livestream launches from their respective YouTube channels. NASA also livestreams activity through the space agency’s Android and iOS apps.

Kennedy Space Center also has a media livestream of the rocket on the pad:

NASA Social is holding its first-ever virtual event this week with around 7,000 participants from all over the world.

The virtual experience includes three days of behind-the-scenes access to Kennedy Space Center locations like the historic Vehicle Assembly Building, Launch Complex 39-A where Artemis III will liftoff to take the first woman and next man to the Moon by 2024, and live Q&A opportunities with NASA officials.

More broadly, NASA has created a single destination for virtual guests at NASA.gov/BeOurGuest for more ways to follow along and participate remotely.

Discovery and Science Channel will also air special coverage of the Demo-2 mission activity this week:

The multiplatform event will also feature some of the biggest names in entertainment with live appearances by global superstar Katy Perry, TV and Internet personality Adam Savage, former NASA engineer and YouTube sensation Mark Rober and other surprise celebrity guests. It will also include expert insight by former astronauts Mike Massimino and Karen Nyberg; active astronauts Jessica Meir and K. Megan McArthur and; NASA Administrator Jim Bridenstine as well as an interview with Astronaut Chris Cassidy from the International Space Station (ISS).

A tropical depression is one challenge facing the Demo-2 mission launch on Wednesday. The 45th Weather Squadron, part of the United States Air Force, has released daily launch support forecasts for Wednesday, May 27.

Each launch mission execution forecast has consistently reported a 60% probability of violating weather constraints including precipitation, thick cloud layers, and cumulus clouds that can prevent a safe launch.

That gives the Demo-2 mission a 40% chance of acceptable launch conditions on Wednesday, May 27. NASA and SpaceX must plan for flight, however, especially given the 40% probability of weather allowing a safe launch.

The final launch mission execution forecast will be issued on Tuesday, May 26, followed by the first forecast for the next launch target for Saturday, May 30.

The final forecast now gives a 50% chance of favorable launch conditions. The next flight targets on Saturday and Sunday currently have 60% chances of favorable conditions.

For Titusville locals, there will be fewer public viewing locations for the SpaceX Falcon 9 Crew Dragon Demo-2 mission than previous shuttle missions.

Kennedy Space Center Visitor Center has been closed since March due to COVID-19 (it reopens with restrictions on Thursday, May 28). This means popular viewing locations like the Apollo/Saturn V Viewing Center will not be available.

Local beaches that are typically popular launch viewing destinations will also be closed or extremely restricted. Playalinda Beach is not expected to be open on May 27, and Jetty Park Beach will be at a limited capacity to drivers and restricted to local residents with annual passes only.

Max Brewer Bridge may be one of the only public viewing locations for the Demo-2 mission, and major congestion issues are expected on launch day. The Titusville Police Department released a special traffic pattern plan for launch day to help manage congestion.

Why the mission matters

Wether you’re viewing at home or taking your chances locally, Demo-2 will be a mission that is remembered as a milestone in history. You won’t want to miss the opportunity to see it play out in real time.

The launch is also a major milestone for NASA’s Commercial Crew program. NASA retired the space shuttle program in 2011 in favor of the goal of eventually relying on commercial launch partners.

SpaceX and Boeing were selected as partners in the program, and SpaceX will be the first commercial company to send NASA astronauts to the International Space Station.

Boeing is trailing SpaceX with its Starliner spacecraft that failed to successfully reach the ISS in a test flight in December 2019. A second uncrewed test flight will happen later this year before Boeing will have its own crewed test flight.

NASA’s Commercial Crew program will be viewed as a success when both commercial partners are operational, and it’s worth celebrating the first of many commercial crew spaceflights to come starting with Demo-2.

The return of human spaceflight to America will also bring more attention to other NASA programs including Artemis. Using a super heavy lift Space Launch System and Orion spacecraft, NASA is hard at work on its goal of sending the first woman and next man to the Moon by 2024.

Returning to the Moon is also a precursor to learning more about long duration missions and transportation methods that will eventually enable human space travel to Mars.

One small step a time…

Stay tuned to Space Explored for the latest updates and launch coverage for SpaceX Falcon 9 Dragon Crew Demo-2 throughout the week!