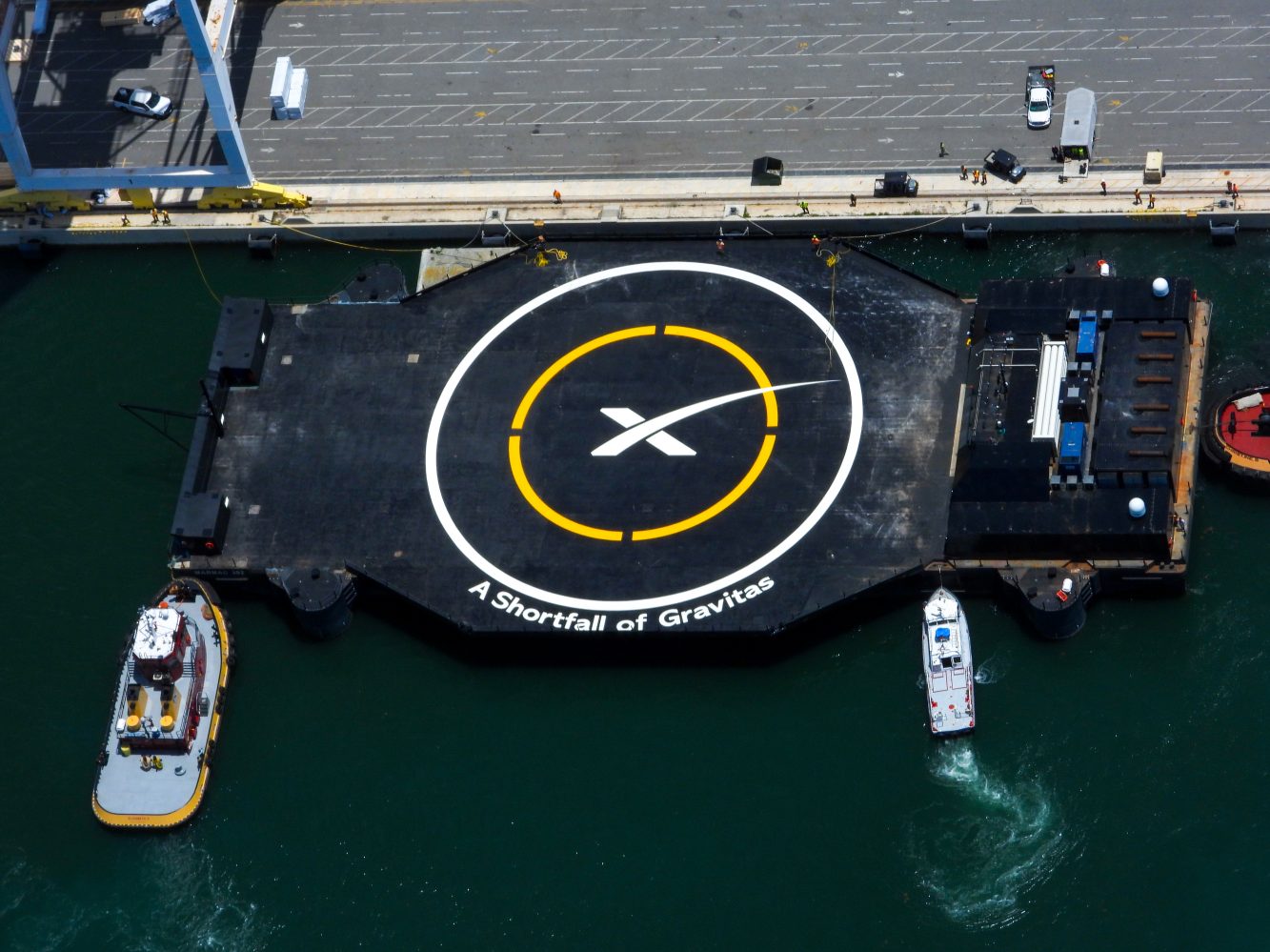 A Shortfall of Gravitas arrival to Florida’s Space Coast

A Shortfall of Gravitas (ASOG) is SpaceX’s latest, and most advanced droneship. Unlike the other SpaceX droneships, ASOG is fully autonomous. This means it will not need a tug to pull it to the landing site. While it doesn’t need one for launches, for its journey from Louisiana to Florida, it was pulled by the tug Finn Falgout.

A Shortfall of Gravitas and Finn Falgout arrived off the Space Coast late last night. Despite this, they waited until daylight and a break in traffic to enter the port. ASOG joins Just Read the Instructions to support Falcon 9 and Falcon Heavy missions launching from Florida.

Having two active droneships on the space coast will allow dual-droneship landings for Falcon Heavy missions. These dual droneship missions would sacrifice a center booster, with the benefit of being able to deliver larger payloads into higher orbits.

A Shortfall of Gravitas droneship naming

Elon Musk doesn’t choose names on a whim. The Falcon rockets are famously named after the Millennium Falcon, from Star Wars. SpaceX’s droneships also pull their names from science fiction. When the first droneships were under construction, it made the news that they would be named Of Course I Still Love You and Just Read The Instructions to honor legendary sci-fi author Iain M Banks’.

Of Course I Still Love You and Just Read the Instructions are the names of two spacecraft from Banks’ Culture series. SpaceX’s droneship A Shortfall of Gravitas also pulls inspiration from the series, being a modification of the “Experiencing A Significant Gravitas Shortfall” ship mentioned in two books of the series.

The name “Just Read The Instructions” has been given to two different droneships at this point. The original was used in early 2015 before a second droneship took over the name.

With its arrival, ASOG replaces the long-serving droneship, Of Course I Still Love You, on the East coast. After supporting many Falcon launches from Cape Canaveral Space Force Station and Kennedy Space Center, OCISLY left to begin supporting missions launching from Vandenberg. It arrived in California, at the Port of Long Beach, earlier this month. The next mission for OCISLY will likely be the launch of Starlink satellites into Polar orbit.

SpaceX has not had a droneship on the west coast since late 2019 when Just Read the Instructions left for Louisiana. After receiving upgrades, the ship moved to the East Coast where it remains. Without a droneship, SpaceX had a significant limit to their payloads launching from Vandenberg.

ASOG will likely undergo more sea trials in the coming days. ASOG’s Octograbber was constructed here in Florida, so we can expect to see it be moved onto the deck of the droneship soon. Octograbber is a remotely controlled robot, and following the landing of a booster, maneuvers out of a garage and clamps onto the base of the Falcon rocket. This helps keep the booster secure on the deck even through rough seas.

A Shortfall of Gravitas’ first launch

Only once SpaceX is confident with the abilities of ASOG will it depart for its first mission. This could be the CRS-23 mission, launching a cargo in a Dragon-2 capsule to the International Space Station. Alternately, JRTI may support the CRS-23 launch while ASOG’s first launch could end up being a Starlink launch.

Exactly when A Shortfall of Gravitas supports its first launch remains to be seen, but it’s a welcome addition to the SpaceX fleet.

A Shortfall Of Gravitas Droneship